What exactly is a Compass ‘Rose’? 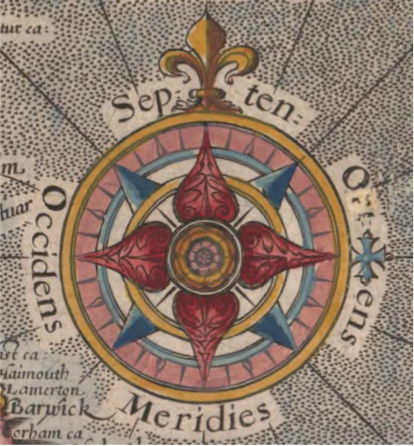 Navigation at sea cannot be imagined without a Compass. We all know how much indispensable it is onboard. But have you ever wondered why our Navigational charts has something called as Compass ‘Rose’ and why is it called so?

Let us first see how compass roses’ were marked on ancient charts and on modern charts.

The History of Compass Rose

Compass roses first appeared on Charts in 1300’s when the Portolan Charts first made appearance. These charts were said to designed in Mediterranean basin and were regarded as highly accurate charts of their times. The word portolan comes from the Italian portulano, meaning “related to ports or harbors“, and which since at least the 17th century designates “a collection of sailing directions” (Source: Wikipedia)

If you look closely above, the direction pointers resembles petals of the Rose and hence the term Compass Rose was used to describe such markings. These markings served the purpose of finding the direction of the winds and were put on the chart in a highly decorative manner.

The Compass Rose, originally, was used to indicate the direction of wind (and it was called wind rose). And on routing charts still one can find those wind roses!

The 32 Cardinal Points on the compass rose from the direction of Eight Major Winds, the Eight Half Wind and 16 Quarter Winds. It was the Chinese, who divided the Compass into 12 Major directions based on the signs of the Zodiac.

For a relatively Modern Western Apprentice, one of the first tasks in previous times was to know all the directions marked on the compass. This was called ‘Boxing the Compass’.

In the ancient compasses the North direction was marked by a spearhead (which was indication of ‘Tramontane’ or the Northern Wind’). This symbol was evolved into “Fleur-de-lis”

First seen on Portuguese charts around 1500, the fleur-de-lis bore multiple meanings: religious, as a Christian symbol of Jesus and his Mother Mary; and political, as a symbol of nobility and royalty throughout Europe. The fleur-de-lis therefore unified both spiritual and geographical symbolism, and soon became the predominant depiction of North on the compass rose. Fleur-de-lis resembled the petal of Lily Flower.

On modern day navigational charts, the compass roses marked are far from decorative in nature. Mostly such compass roses are made up of two concentric circles where the outside circle bears the degree notations based on TRUE NORTH directions, where as the graduations on the inner circle are based on MAGNETIC NORTH. The Compass rose also bears the value of the Variation along with its rate of change. The arrow points in the direction of the Magnetic North (notice the picture above).

Hope you found this article interesting!

Subscribe to our newsletter to get notified of
Latest Maritime News and Information!

You have successfully subscribed to the newsletter

There was an error while trying to send your request. Please try again.